“When it is a million degrees outside, it makes staying inside to code really easy!” jokes Zia Syed, an MSE ‘00 grad. A native Pakistani who grew up in Saudi Arabia, Zia feels that it was this early forced focus on coding that led him to the MSE, and eventually his own company — ClipMine.

“It was only natural that I learned to love programming, but like most, I started to encounter problems with ad hoc programming that really frustrated me,” Zia explains. “During high school and into college, I wrote a lot of code without paying attention to reuse. That led to a lot of bug fixing in similar code all over the codebase. I thought that there has to be a way to do this properly and efficiently.”

And so, Zia considered his approach. “I could either try to learn this entirely on my own or I could seek out experts who have years of industry experience to teach me. I opted for the latter; partly because I knew I would advance my own understanding much quicker when I was surrounded by experts.” It was this focus on expertise and Zia’s passion for discovering best practice that led him to enroll in the MSE program in 1999.

After the program, Zia took a position with Siebel Systems and then eventually Google. Here, he worked on Enterprise Search, GMail, and a new very large scale distributed file system called BlobStore. It was, as Zia notes, one of the most challenging and exciting projects of his career. “The scale is massive. It spans most of [the] Google data centers. It is probably still the biggest file system in the world that you’ll never hear about since it is buried so deep inside Google’s infrastructure.”

But over the next few years Zia would become deeply familiar with BlobStore as he and his team built out the system, eventually building a second version, BlobStore, on top of it. The system addressed issues of file redundancy, sharing, and integration across Google’s platforms. “Say, for example, you have an attachment in Gmail and the same file in Google Docs. Before Blobstore, they’d have never known about one another,” Zia explains. “It was a fascinating challenge but also really stressful. Our main client was Gmail and we were also responsible for the migration.” But migration projects are never simple and this wasn’t just any migration; this was Gmail. Zia continues, “Not only did we have to develop this massive file system, we also had to figure out how to migrate hundreds of petabytes of data off of the legacy system. All of that without breaking Gmail.”

So, how does one deliver on a project of that scale? The MSE helped, Zia says, as one of the issues you always encounter leading a project like this — especially at Google — is estimation. Zia points to two opposing views at the root of the estimation issue. “On one hand, there were issues with overestimations; deadlines weren’t going to be met, so sacrifices were made and quality suffered. On the other hand, there were issues with analysis paralysis and a fixation on top quality which led to delays.” But as Zia explains, the MSE taught him how to navigate between these two extremes. “It was all about getting the team to take a step back and look objectively at the risks and roadblocks to give a more realistic estimate. And it worked pretty well.”

After 10 years at Google, Zia struck out on his own, founding ClipMine in 2013. ClipMine is a platform which indexes specific topics in online video, allowing users to glean a breakdown of the content for more effective consumption. “I built ClipMine out of my own personal frustration. You come across videos, whether they're lectures, keynotes, speeches, or any long form video content, and it’s super hard to consume because you don't want to waste your time. You don't know what's inside it.” And, Syed continues, that is where ClipMine comes in. “Our goal is to take any video and produce a table of contents for it through both automated analysis and crowdsourcing. This crowdsourcing component is what makes us unique.” As he explains, once a user submits a video to ClipMine, it is automatically analyzed and a table of contents is produced. This table of contents enables people skim through the video, scan the contents, search inside the videos, bookmark or share specific parts. And, whats more, you don’t need to deal with timestamps or a scrubber at all when doing all this. From there, users can refine the table. “Just like Wikipedia, start with a video and keep adding adaptations. Over time, adaptations will stabilize and the table of contents will pretty accurately reflect what’s in the content.”

And Zia has learned a great deal, even in those two short years since ClipMine’s founding. Foremost is the importance of environment. “Surround yourself with experts. Decision making is one of the biggest challenges in a start-up,” he explains. “You make a ton of decisions on a daily basis that have no clear right answer.” But as Zia explains, these decisions often fall outside the scope of his experience and training in technical project management. “Do we expand the team? Which customers should we get? How much time should I spend engaging with external people or doing internal development? These are really tough questions that first time founders face and that I [had] little experience addressing.”

But much like he did years before while considering grad school, Zia turned to the experts. “It is all about environment. Surround yourself with those facing similar challenges, advisors, and mentors. Most of the stress in these decisions comes from inexperience. Find the smartest, most experienced people you can and learn from them.” And choosing the right environment for personal development doesn’t just apply to the business side of the house, it applies equally to the technical. “Develop expertise in the area you want to be in. For me, when I think back on my experience, I probably should have joined the YouTube team when I had the chance. That would have given me a lot more exposure into the video ecosystem and how things work.”

Finally, Zia says that the process of embedding yourself in the right environment for growth starts with a single, simple step: Don’t keep your idea a secret. “A lot of people keep their business idea a secret while they are continuing to work. At least for me, this was due to a fear of appearing ungrateful for opportunities given; opportunities to do world-changing work at world-class companies,  But your idea is never going to grow and mature if you don’t get feedback.” Find those around you, Zia explains, with an interest in startups or the domain and then discuss your idea with them. “What's the worst that could happen? They laugh at your idea? So what!”

So, for all those thinking about starting their own business, think about taking Zia’s approach: Start early, surround yourself with the best, and don’t fear failure. It won’t be easy and it definitely is a little scary, but it is never too late to make your own ideas, your own dreams, your own goals a reality. Get out there and make it happen! 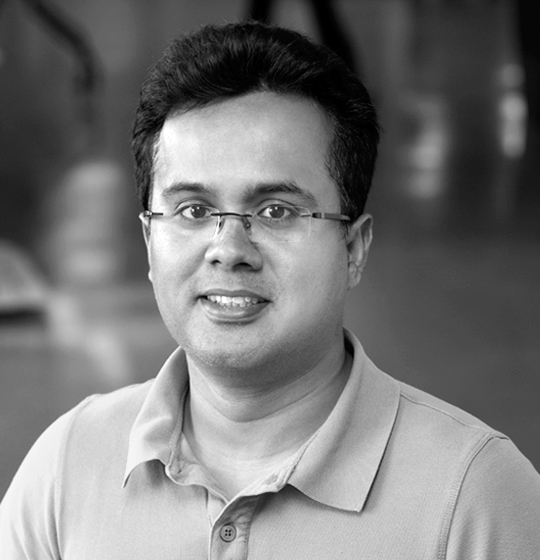 Zia Syed is the founder and CEO of the Bay Area startup ClipMine. After graduating from the MSE program in 2000, Zia led several notable projects at Google for almost 10 years before entering the world of entrepreneurship. He shared with us his story and advice for those considering their own venture.